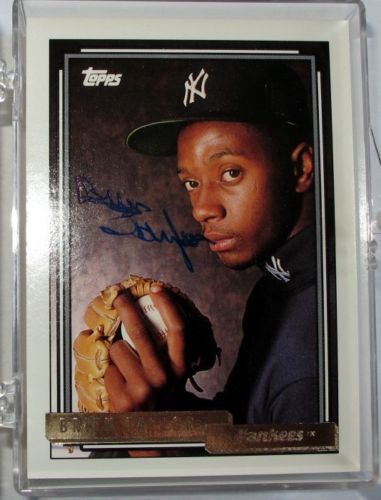 Sorry boys, this isn’t going to be about Carmen Electra, Jennifer Tilly, Yasmine Bleeth & Denise Richards. Our topic today is, however, about a word that will cause excitement for Fantasy players and baseball card collectors everywhere and that word is PROSPECTS!

By definition, a prospect is a possibility or a chance, but baseball fans seem to cling to the expectation that most prospects will become stars. After all, we’ve scouted these guys, watched their progress, analyzed the numbers and we’re sure that all our choices will equal the success of Aaron Judge or Cody Bellinger. That will put us over the top in our Fantasy league or make us a fortune on eBay when mere mortals are bidding on our stash of rookie cards. The truth is that the odds of that happening are very small and we don’t always factor in the reality when assessing young players. In fact, sometimes, our worst outcomes emanate from our actual success. Doesn’t every Fantasy league have at least one owner who picked up an end-gamer in a draft who became a star? The problem is that he’ll always remember that success and it could adversely impact his strategy for the next decade as he chases the next Mike Trout and it turns out to be Bubba Starling.

For card collectors, it can be even more harsh. Looking at collections over the years, the Old Duck can’t begin to calculate how many times he’s seen stacks of rookie cards from the 1990’s representing a significant investment. Do the names Jeff Jackson, Jeff Juden, Kyle Abbott, Eric Anthony, Tyler Houston, Ben McDonald & Kevin Maas sound familiar? If you collected Topps baseball cards in 1990, they certainly would. And, they’d be sitting in a box in your garage collecting dust. Right next to them would be a box from 1991 that included the rookie cards of Shane Andrews, Greg Colbrunn, Tim Costo, Carl Everett, Brian McRae, Mike Lieberthal, Marc Newfield & Dan Wilson. In 1992, it was Scott Ruffcorn, Brad Ausmus, Shawn Green, Greg Anthony, Eddie Taubensee, Mike Magnante, Pat Mahomes, Pokey Reese & Scott Hatteberg.

So, with the calendar turning and Fantasy thoughts starting to percolate in our brain, let’s help keep prospects in perspective by looking at some the top players for each year of the 90’s. To keep us from getting too carried away with the value of our “can’t miss” players, we’ll only look at ones in Baseball America’s top twenty who never made an impact along with some who never even played a game in the major leagues.

1992 > #1 Brien Taylor, Yankees Pitcher – This youngster was the first pick in the 1991 Draft…he was so hyped as a future star, Topps produced a limited edition “Gold” factory baseball card set in 1992 that included an autograph card of this phenom before he ever threw a pitch in pro ball. Arm problems and personal issues prevented him from ever pitching above AA and his lifetime ERA as a minor-leaguer was 5.12.

While I’d like to spend more time convincing you to temper your excitement about prospects, it’s time for me to head for the garage and sort out the rookie cards of future Hall-of-Famers Gregg Jeffries, Pete Incaviglia, Candy Maldonado, Jerome Walton & Oddibe McDowell. You see, some of us were even around in the 80’s.