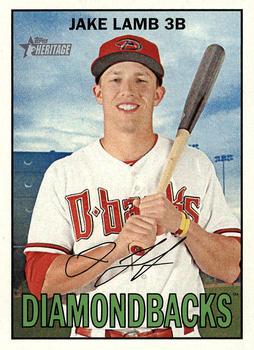 MLB is on the cutting edge of sports technology and it is making their teams rich. In 2000, they established MLB Advanced Media (BAM) and it has become a $3 Billion enterprise that supplies streaming video services to ESPN, HBO and the WWE.

For the fan, player and front-office executive, BAM has become the go-to provider for advanced analytics through “Statcast”. For the past two seasons, this operation has tracked every pitch, hit & catch in every major league game and gives us information we’ve never been privy to before. Much of the data is proprietary but even the basics you can find at mlb.com are fascinating as well as informational.

In a recent Sports Illustrated article, Albert Chen tells the story of D’Backs 3B Jake Lamb. Even at age 25, Lamb is an old-school type player and doesn’t pay much attention to stats. This past off-season, he worked on swing changes that he hoped would help improve on his 2015 numbers of 6 HR’s & 34 RBI’s in 350 AB’s. Early in 2016, he was struggling and wondering if what he’d done was really going to work. What Statcast told him was that his average “exit velocity” (how hard he hit the baseball) at that point in the season was higher than Miguel Cabrera, Bryce Harper and his teammate Paul Goldschmidt. In other words, the changes were working and he just needed to have patience. The result? Through August 27th, he has 25 HR’s & 79 RBI’s in 422 AB’s.

Does exit velocity matter? Let’s look at the top ten hitters in this category for 2015 and determine if their 2016 seasons have been successful…

If you extend the list to include 93+ mph, Mike Trout, Yoenis Cespedes & Paul Goldschmidt join the group. Aside from injuries to Stanton & Bautista, the only players that have struggled slightly are Grichuk & Sano…and they still have 38 HR’s between them. The most telling information (especially for Fantasy players) was that many of the older players still had their skills intact and weren’t yet “over the hill” despite their age. And, maybe including this information in your scouting tool-box would have led you to Trumbo.

Cespedes, Grichuk & Cabrera are once again over 93 mph. Statcast will also tell you which players had the highest average distance, the highest launch angle and average height. If you believe the monitor at your golf pro shop when you’re buying that new driver, you should believe these stats.

Just for the record, Stanton produced the hardest hit ball of the year on June 9th at 123.9 mph…it was a ground ball that turned into a double play!