No matter your political persuasion, there’s no doubting that social justice is a topic that currently resonates throughout the country. As a baseball fan who was born before the color line was broken, looking back always helps me to keep my perspective. There is no better example of institutional racism than major league baseball.

From the end of World War II until 1961, there were 16 major league teams playing baseball. Beginning in 1947, it took 12 years for all teams to roster a black player. As a kid growing up in Boston, the Red Sox and Ted Williams were my passion. I knew every player, their stats and their uniform numbers. One of the things I didn’t really notice was that all the members of the team were white. Once my parents gifted me with a transistor radio and I was able to pick up the Dodger broadcasts from Brooklyn, it was easy for the “Bums” to become my favorite National League team. It also opened my thoughts to the society around me because the Dodgers had numerous players of color who excelled in Brooklyn. The Red Sox were the last team to roster a Black player and it happened in 1959, a full 12 year gap. Tom Yawkey owned the team from 1933 until his passing in 1976 and even today, his legacy is tainted by this lack of inclusion by the franchise. Ironically, Williams’ Hall of Fame induction speech in 1966 was highlighted by his appeal for African-American players to be considered for Hall of Fame consideration. That moment opened the door for Negro League stars to be acknowledged.

Today, we’ll look at the 16 players who were part of this history. From Hall of Fame members to guys you’ve never heard of, it is a unique baseball club…

1947 – Jackie Robinson, Brooklyn Dodgers. Team owner Branch Rickey was the driving force and his desire to find exactly the right individual paved the way. If the experiment with Robinson failed, there’s no telling how long it would have been before another player got the chance. A ten-year career with six NL pennants led to Jackie’s induction to the Hall of Fame in 1962. In case you think that 15 years changed everything, he was only listed on 124 of 160 ballots from the writers. 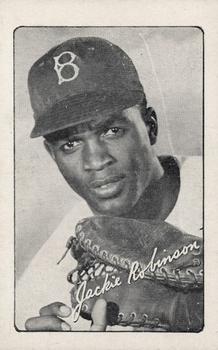 1947 – Larry Doby, Cleveland Indians. Arriving from Newark of the Negro League at age 23, he became a stalwart in the Tribe’s line-up during the 50’s and had over 100 RBI’s in five seasons. The Veteran’s Committee voted him into Cooperstown in 1998.

1947 – Hank Thompson, St. Louis Browns. A unique part of this story, Thompson was a Negro League player who joined the Browns at age 21. He only had 78 AB’s that season and was released prior to the 1948 campaign. Wonder what ever happened to him?

1949 – Monte Irvin, New York Giants. He and Thompson broke into the big leagues on the same day…July 8th. After playing nine seasons in the Negro Leagues, he became a major leaguer at age 30. Seven solid years with New York including a league-leading 121 RBI’s in 1951. Voted into the Hall of Fame by the Negro League Committee in 1973. 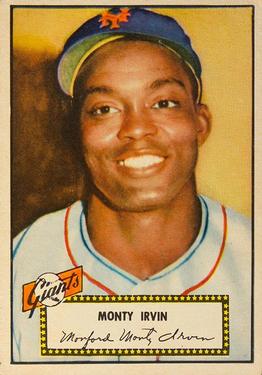 1950 – Sam Jethroe, Boston Braves. Playing across town from the Red Sox, this speedy outfielder first played in the Negro League in 1938. As a 33 year-old, he won the NL Rookie of the Year award in ’50, leading the NL in steals with 35. He had another productive season in ’51, leading the league in SB’s again. His 1952 season was hampered by injury and illness and when the Braves relocated to Milwaukee in 1953, he wasn’t offered a contract. 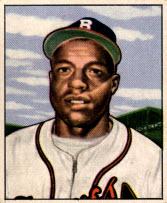 1951 – Orestes “Minnie” Minoso, Chicago White Sox. One of the most exciting players of the era, this Cuban Outfielder thrilled the fans on the South Side of Chicago. He made six All-Star teams in the 50’s and won three Gold Gloves for his defense.

> 1953 – Bob Trice, Philadelphia Athletics. One of the more obscure members of this group, he pitched three seasons for the A’s with a lifetime record of 9-9.

> 1954 – Carlos Paula, Washington Senators. Another Cuban OF, he was a part-time player for three seasons.

1955 – Elston Howard, New York Yankees. Unlike the Dodgers & Giants, the Yankees were late coming to the party. Howard was an outstanding player for the Bronx Bombers, making nine consecutive All-Star teams from 1957-65. He played in ten World Series and was the AL MVP in ’63.

> 1957 – John Kennedy, Philadelphia Phillies. The shortest career on our list, he had two AB’s without a hit and went back to the Minors, never to be in “the show” again.

> 1958 – Ozzie Virgil Sr., Detroit Tigers. From the Dominican Republic, he played two seasons with the Giants before joining the Bengals. Had a nine-year career as a back-up at multiple positions.

1959 – Pumpsie Green, Boston Red Sox. This middle-infielder was the last of the pioneers. A part-time player in Boston for four seasons, he finished his career with the Mets in 1963. In a sports-related side note, the Boston Celtics were the first NBA team to draft a black player…Chuck Cooper in 1950. 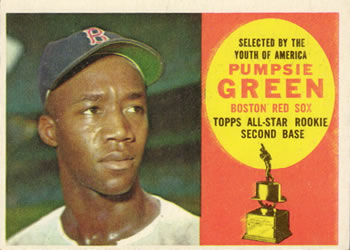 16 names to be remembered…