In my community, we have a very active sports interest group that includes scores of avid baseball fans. Over the past ten years, we’ve been fortunate enough to host wonderful presentations by sports legends who have been kind enough to visit us out of the goodness of their heart (we offer no compensation other than our thanks). Our guests have included writers, broadcasters, players like Josh Hamilton, John D’Acquisto and Matt Williams as well as Hall of Fame members Ferguson Jenkins and Roland Hemond.

A few years ago, we were lucky enough to meet both Jerry Hairston Sr. and Mike Bell. What makes their appearances unique is that they represent two of only four families in history to have three generations play in the Major Leagues. So, for today’s history lesson, let’s look at these baseball family trees and see what it would take to collect the baseball cards of each branch.

The first family to achieve the distinction (in 1992) of having the Grandfather, Father & Son play in the “Show” was the Boones –

Ray Boone played 13 seasons in the Majors beginning with the Indians in 1948…his best years came with the Tigers in the mid-50’s when he made two All-Star teams…had a .275 career batting average with 151 Home Runs…his rookie card was in the 1951 Bowman set and is worth $40 in NM (near mint) condition

> Bob Boone was one of the most durable Catchers of his era and played 19 seasons starting in 1972…won seven Gold Gloves and accumulated over 1,800 Hits…his rookie card can be found in the 1973 Topps set and books for $10

In 1995, the Bell family became the second in this elite company –

David “Gus” Bell came to the Majors in 1950 as an Outfielder with the Pirates and went on to play 15 seasons…his prime years were with the Reds and he made four All-Star teams between ’53 & ’57 while accumulating over 200 Home Runs and a .281 lifetime Batting Average…the 1951 Bowman set is where you’ll find his rookie card and it will set you back about $40

> David “Buddy” Bell was an excellent 3B who broke in with Indians in 1972 and played 18 seasons…six Gold Gloves and over 2,500 hits gives you an idea about his consistency…he later managed the Tigers, Rockies & Royals…his rookie card from 1973 Topps is about $3

The  Hairstons became the third family in 1998 –

> Sam’s Brother, John Hairston, was the next family member in the Majors when he appeared briefly for the Cubs in 1969…he played professionally for seven seasons

Jerry Hairston Sr. made his debut with the White Sox in 1973 and played 14 seasons as a Major League Outfielder with a .258 lifetime Batting Average…his rookie card can be found in the 1974 Topps set 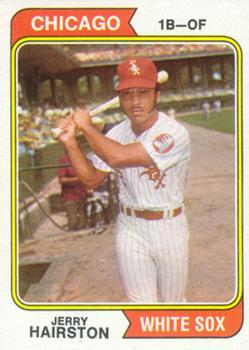 > Jerry Hairston Jr. came to the big leagues in 1998 and had a 16-year career…an indispensible utility player, he could fill in all over the diamond…his rookie card is in the 1998 Fleer Update set

> Junior’s Brother, Scott Hairston, is the most recent addition to the family legacy…he came up in 2004 and played 11 big-league seasons …the 2000 Bowman Chrome set is where his rookie card can be found

In 2010, the fourth family joined this elite list as the Colemans came on board –

Will there be another addition to the legacy? Think about this…there have been over 200 Father-Son combinations in the major leagues including current Sons Cam Bedrosian, Cody Bellinger, Bo Bichette, Cavan Biggio, Robinson Cano, C.J. Cron, Vladimir Guerrero Jr., Fernando Tatis Jr. & others.