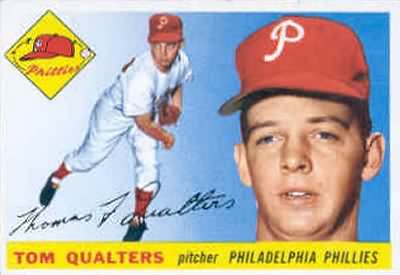 For baseball fans under the age of 50, there’s never been a time without baseball’s Amateur Draft. For Fantasy Baseball players in deep leagues, the identity of three young players named Adley Rutschman, Bobby Witt Jr. & Andrew Vaughn is certainly no secret. Back in the covered-wagon days of the 1950’s however, acquiring the top young talent in the land was a totally different process.

In the days before the World War II, major league organizations would scour the country looking for players and then try to sign them on the spot, often getting into bidding contests with other teams. In that era, College Baseball wasn’t the factor it is today and teenagers would welcome the chance to become professional ballplayers. Starting in 1947, baseball began an attempt to curtail this process with a succession of procedures linked to signing bonuses. The idea was to block the ability of the richest franchises to buy up the best young players and then hide them in the cupboard known as their minor-league system. Remember, this was long before the days of free agency and players were employees without rights.

The first process only lasted from 1947-1950 before being rescinded, but the problem was still there for the majority of the teams. Prior to the 1953 season, a committee chaired by Branch Rickey developed a “Bonus Baby” rule that ended up being part of the major league landscape for five years. The basic premise wasn’t to establish a cap on signing bonuses, but to require that a player signed above a certain dollar figure must remain on the major league roster for two seasons without being “farmed out” to the minor leagues. That meant teams would have to use up one (or more) of their 25 roster spots on a player who might not be able to contribute to the team’s success.

Over 50 players fell into the “Bonus Baby” category between 1953 and 1957 and the success rate was abysmal. With that being said, however, three of these individuals ended up in the Hall of Fame, but took very different paths that were affected by the rule…

> Al Kaline was signed by the Tigers out of High School in June of 1953. He immediately made his major league debut on June 25th at age 18. While Kaline only had 30 AB’s during that first season, by 1954 he was an everyday player and finished 3rd in the Rookie of the Year voting. His career lasted until 1974 without spending a single day in the minor leagues.

> Harmon Killebrew signed in June of 1954 and was six days shy of his 18th birthday when he made his major league debut on June 23rd. “Killer” had only 13 AB’s that season and then 80 AB’s while he spent the entire 1955 campaign at the big league level. After meeting the two-year obligation, he spent most of the next three years learning his craft in the minors and didn’t became a regular until 1959, when he led the AL with 42 HR’s.

> Sandy Koufax signed his contract with the Dodgers in December of 1954, spent the next two seasons in Brooklyn and only made 15 starts with a record of 4-6 with an ERA of 4.14. As with Kaline, he never spent a day in the minor leagues but it wasn’t until 1961 that became a star.

Let’s look at some of the others names that fell under this umbrella during the 50’s. By the way, if you look up any of them on baseball-refernce.com, it will say “bonus baby” in parenthesis next to their name.

> The Pirates signed the most bonus babies (8) and a famous name was Vic Janowicz. Unfortunately, his fame came primarily from football, as he won the Heisman Trophy in 1950 while playing at Ohio State. His only two seasons in baseball were the obligatory ones of 1953 & 1954 and he hit a combined .214 in 196 AB’s. Interestingly, he also played Halfback for the NFL Washington franchise in ’54 & ’55.

> Seven youngsters were signed by the Orioles including Pitcher Bill O’Dell. He actually lost three years as the two required seasons were wrapped around military service in 1955, but he ended up with 105 major league victories in a 13-year career.

> Pitcher Joey Jay of the Braves overcame three years of relative inactivity to become a two-time 20-game winner for the Reds in the early 60’s.

> SS Dick Schofield of the Cardinals had a 19-year major league career and has to be included on this list because his nickname was “Ducky”. And yes, his Son (also named Dick) played 14 seasons in the 80’s & 90’s.

> One very shady episode during this era was the A’s signing of 18 year-old 3B Clete Boyer in May of 1955. He only had 208 AB’s in his first two seasons and then, as soon as the 24-month requirement was met, the A’s traded him to the Yankees as “the player to be named later” in a previous deal. American League teams, already convinced that the two teams had an under-the-table relationship, complained that the A’s had just used their roster to hide a player the Yankees coveted. However, the trade was allowed and Boyer became the Bronx Bombers’ regular 3B during the 1960’s.

> Speaking of the Yankees, one of their choices shines a light on the underside of the consequences to this rule. In 1953, they signed High School 1B Frank Leja. A 6′ 4″ left-handed power hitter, he seemed like the perfect fit for their ballpark. Unfortunately for the kid, the Yankees of the 50’s were a juggernaut filled with talented players and he ended up getting only 7 AB’s (and one hit) in two seasons. He bounced around the minor leagues for the next half-dozen years, even hitting 20+ HR’s a number of times but it was 1962 before he wore a major league uniform again. He went 0-for-16 for the expansion Angels in early ’62 and retired the following year.

> Another sad tale is that of the Phillies Tom Qualters. This 18 year-old Pitcher only got into one game in 1953, pitched 1/3 of an inning, allowed 6 Earned Runs and ended up with a ERA of 162.00. In 1954, he spent the entire season on the roster and never pitched at all. His career numbers show 34 appearances without ever winning a game. His teammates nicknamed him “Money Bags”.

As all fans know, baseball history has its shameful side…from the Black Sox scandal to the color line. This five year period doesn’t get the same scrutiny, but a closer examination tells an ugly story. None of the 50+ players that fell into the “Bonus Baby” category were players of color. Even though most major league teams had broken the color barrier by this time, they certainly didn’t think it was necessary to bid against each other for youngsters from a poor background who had no leverage. So, even though Bob Gibson, Frank Robinson, Willie McCovey & Billy Williams were all signed during this timeframe, none of them received a bonus above the threshold. The bright side is that today, they are all in the Hall of Fame.