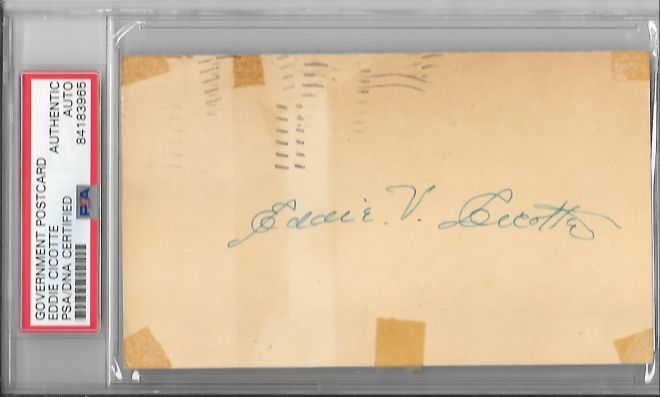 Those of us who have a lifetime passion for the game of baseball have a tendency to think we’re more knowledgeable about the game than the next guy. And, after penning 400+ columns on the subject, I’m no exception to the rule.

Well, I’m here to tell you that it is time for your scribe to eat some humble pie…and the main ingredient will be horsehide! In other words, as you’ve probably already guessed, there’s a lot about baseball I don’t know.

Being from the first class of Baby Boomers, my knowledge of post World War II baseball is pretty extensive. There aren’t many players from that era who have a name that isn’t familiar to me. Along with the recognition, there are hundreds of small stories that are still clinging to my gray matter…Eddie Waitkus was the real Roy Hobbs, Tony Conigliaro got beaned by Jack Hamilton, Mike Kekich & Fritz Peterson swapped wives during Spring Training…and so many more. Yet, even I’m taken by surprise on occasion… just the other day, a customer at the baseball card shop stumped me with, “What Yankee player wore #3 after Babe Ruth and #7 before Mickey Mantle?”

As for the first half-century of baseball, most fans know the famous – and infamous – stars of the era…Babe Ruth, Ty Cobb, Shoeless Joe Jackson, Cy Young, Christy Mathewson and the like. The real question is, however, which great stars of the time have names that are essentially unrecognizable to even avid baseball fans? That question has come home to roost for your humble blogger, as I’ve been asked to curate and market a collection of over 1,000 sports autographs for the estate of a long-time sports fan. In a November visit, I detailed the project, but here’s the short summary…

In the late 1940’s, a young sports fan decided to build an autograph collection. The process was simple, but effective, as he would send a self-addressed post card in an envelope with a note to the player (or team) asking them to sign the postcard and mail it back. In the days before eBay, auction houses and the marketing of autographs, athletes were happy to fill the request. The youngster would cut out the signature portion of the returned post card and tape it an album along with pictures and articles of the players. As he grew up, the collection began to include many signatures acquired in person at games and other events. The end result was a collection that included thousands of autographs from ballplayers of multiple generations.

Almost 200 autographs have been chosen so far and they have been (or will be) authenticated by PSA, a third party company that specializes in sports memorabilia. Here are some of the players included up to this point. A few of the names might be familiar, but do you really know their story?

> Eddie Cicotte – If you have seen “Eight Men Out”, you may know that he was the star Pitcher of the 1919 White Sox and one of the players who conspired to throw the World Series.

> Monty Stratton – A Pitcher for the White Sox from 1934-1938, he lost his leg due to a hunting accident prior to the 1939 season. Worked with the team for the next two years as a Coach and batting practice pitcher (using a prosthetic leg). He actually pitched in the minor leagues after World War II and was immortalized in the 1949 film “The Stratton Story” in which he was portrayed by Jimmy Stewart.

> William “Baby Doll” Jacobson – An AL OF from 1915-1927, his lifetime BA was .311. While in the minor leagues at Mobile in 1912, he was the lead-off hitter in the first game of the season. The band played “Oh, you beautiful doll” as he walked to the plate and he hit a Home Run on the first pitch…the nickname stuck.

This project has taught me a lot…how about you?

Oh, the Yankee player who is the answer to the Ruth/Mantle question is Cliff Mapes. In 1948, he wore #3 but Babe Ruth passed away that year and the Yankees retired the number. He wore #7 for the next 2 1/2 seasons, but Mantle (who originally wore #6) took the number when Mapes was traded in 1951.