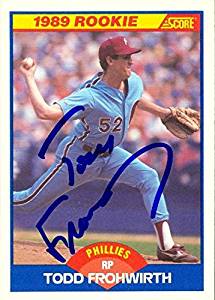 Back in the 80’s & 90’s, when ESPN was still watchable, Chris Berman made baseball fans laugh with his sports nicknames. At one point, “Boomer” (Berman’s nickname) was told by one of the network’s producers that he wouldn’t be allowed to use the nicknames the following season. While attending the World Series, Berman mentioned the new policy to a few writers and ballplayers. ESPN was then deluged with negative comments from MLB insiders with Hall of Famer George Brett leading the protest. The policy was rescinded very quickly…no one knows what happened to that producer.

To pass some time during the Hot Stove season, let’s look back on some of the best from Boomer and include a tidbit or two on the player.

> Scott Supercalifragilisticexpiala Brosius – Was the 1998 World Series MVP with the Yankees.

> Carlos One if by Land, Two if Baerga – Made four All-Star teams with the Indians.

> Carlos Daylight Come and Delgado Go Home – Long before the NFL issue, he protested the wars in Iraq & Afghanistan by not standing for “God Bless America”.

> Harold Growing Baines – Inducted into the Hall of Fame in 2019.

> David Supreme Court Justice – Forget the 300+ HR’s, he was once married to Halle Berry.

> Bert Be Home Blyleven – Hall of Fame Pitcher with 287 Wins.

> Dave No Man is an Eiland – Has been a major league pitching coach for the Yankees, Royals & Mets.

> Sammy Say it Ain’t Sosa – If you saw him now, you’d understand how ironic this is.

> Todd Which Hand Does He Frohwirth – My personal favorite.

> LaMarr Where Does it Hoyt – Won a Cy Young Award but also got arrested for trying to bring drugs across the border from Mexico.

> Tom Cotton Candiotti – A knuckleballer, he played Hoyt Wilhelm in the movie “61”.

> Bobby Bad To the Bonilla – The most overpaid player in history, he still gets $1 Million from the Mets every Summer.

> Ozzie Like A Virgil – His dad was a major league player before Madonna was born.

> John I Am Not a Kruk – Had a testicle removed during the off-season and came to Spring Training wearing a T-shirt that said, “If they don’t let me play, I’ll take my ball and go home”.

> Roberto Remember the Alomar – 10 Gold Gloves and a plaque in Cooperstown.

> Mike Enough Aldrete – Drafted by the Giants out of Stanford University.