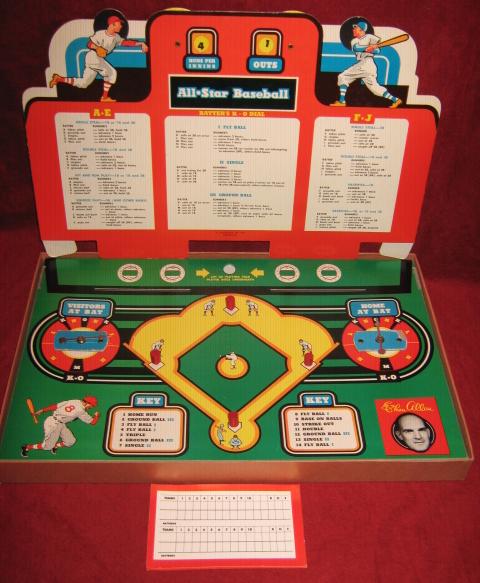 In the last few years, the Old Duck has made presentations to a number of groups (including SABR) about Fantasy Baseball. As many of the attendees are from the Baby Boomer generation, they need to be reminded that young baseball fans have always played some sort of game that simulated our national pastime.

In ancient times before personal computers and the Internet, board games were an important part of American culture. As youngsters in the 50’s & 60’s, we had a number of choices when it came to baseball-themed games and each one has its aficionados. American Professional Baseball Association (APBA) was first introduced in 1951. Created by Dick Seitz, it was played with dice and player cards representing both hitting and pitching statistics. The game caught on immediately and allowed fans to pass time during the off-season. As Seitz refined the game, it continued to gain popularity and is still sold today. And now, the game is offered in baseball, football, golf, hockey & soccer.

During the same era, Hal Richman was also developing a baseball simulation game and Strat-O-Matic was introduced in 1961. While it took a little longer to catch on (Richman had to borrow money from his Father in the 3rd year), the game survived and now has a cult following and is updated each year with current players.

The game that took me and my friends away from our homework was called All-Star Baseball and it has a long and interesting history. First distributed in 1941, it was never as intricate as APBA or Strat-O-Matic and didn’t include pitching stats, but for the target audience of 9-12 year-old boys, it was the most fun we could have while also learning the history of the game.

Ethan Allen was a major league outfielder from 1926-1938 and had a lifetime batting average of .300. He later was the head baseball coach for Yale University, winning five Ivy League championships in his 23 years at the school. For Allen, however, all of these accomplishments pale in comparison to his creation of this famous board game. The key to the game were player disks where the individual player’s statistics were represented. Power hitters would have a larger home run area while contact hitters were more likely to hit singles, so when you placed the disk in the game’s slot and spun the dial, the outcome of each at bat would be based in reality. Youngsters would put teams together and then by making up a batting order of the disks, play out a nine-inning game to determine the winner. Results of each play are recorded on the field using plastic pegs for base runners, while runs and outs are posted on a rotating scoreboard.

To understand the genesis of the game, here’s Allen’s recollection in a 1983 interview with The Sporting News – “I had this idea, even when I was playing, that you could put a man’s playing record on a disk. While I was with the Cubs in 1936, I went to various manufacturers with the hope of selling the idea to them as a game, only to have most of them practically kick me out of their offices.”

The moment of truth happened when Allen approached a Chicago company called Cadaco-Ellis in 1940. Donald Mazer was the principal owner and had marketed other sports board games such as “Elmer Layden’s Scientific Football”, “Touchdown” and “All-American Football’. Mazer made a quick decision to add All-Star Baseball to the company’s products and 40 star players of the day were included in the 1941 edition. The following year, 19 of them returned and the rest were replaced by other stars…that’s the way it worked for the next 50 years.

For an old codger, the memories of playing this wonderful game as an 11 year-old come rushing back. Other than the recollection of putting a band-aid on my index finger to alleviate the pain from hours of hitting the metal spinner, the clearest memory is the disks and the players they represented. By the 50’s, the game had evolved and not only had disks of current stars like Ted Williams, Duke Snider & Hank Aaron, it also had added legendary Hall-of-Famers. We didn’t need a baseball encyclopedia when we could look at the disk and understand the player’s statistical attributes. Some of the players who would occasionally be in the line-up included Ty Cobb, Eddie Collins, Bill Dickey, Lou Gehrig, Rogers Hornsby, Walter Johnson, Mel Ott, Babe Ruth, Tris Speaker, Pie Traynor & Honus Wagner.

One thought on “This Ethan Allen Made Memories, Not Furniture”