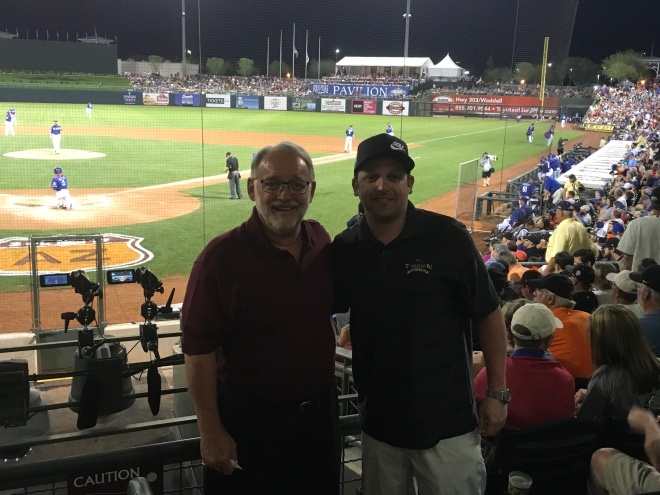 In 1978, there was a movie titled “Same Time Next Year” starring Alan Alda & Ellen Burstyn. It wasn’t a classic film but was certainly entertaining, which is confirmed by its 7.2 rating on imdb.com. The plot was about two people, both married to others, who meet by chance at a romantic inn and end up sharing a night together. The next morning, they are wondering how this could have happened but decide to an agreement. They will meet each year on the same weekend at the same place and renew their relationship. Originally a stage play, the story takes the audience through the years with the same couple in the same room. The episodes take us from the early 1950’s to the mid 1970’s, as the changes in the world and their lives impact their relationship.

As I sat behind home plate at Surprise Stadium for 30+ games this February & March, the title of that movie popped out of my aging grey matter and wrapped itself around this wonderful annual experience. The girl I love each year is named Spring…it just so happens that her last name is Training. With apologies to Elizabeth Barrett Browning, “How do I love thee? Let me count the ways.” Of course, it was Sonnet 43, so she probably had a Dennis Eckersley jersey.

> The weather in Arizona this time of year is absolutely beautiful. Azure blue skies and emerald green grass greet you everyday at the ballpark.

> The ballpark is the most comfortable and fan-friendly of all the Cactus League facilities. Even though it opened in 2003, the newer parks with all the whistles and bells can’t compare with the sightlines and intimacy of this gem. It has a single concourse, allowing easy access for all fans. The concessions are on the concourse, so you don’t miss any game action while feeding your appetite or quenching your thirst. There are small upper-decks above 1B & 3B that hang out over the lower seats and add another viewing  perspective to the game. And, a local group of over 500 volunteers called the Sundancers are always there to assist you with everything from parking to charity raffles to wheelchair access for disabled fans to being at the top of every aisle helping fans find their seat.

> What isn’t apparent to most fans is that the ballpark has a second name…Billy Parker Field. When Billy Parker made his major league debut with a game-winning home run for the Angels on September 8, 1971, you probably could have completed the census of Surprise by yourself over a weekend. After his baseball career ended, Billy worked with youth programs for the city and was much beloved for his volunteerism before he passed away in 2003. Today, he would be proud to see the thousands of Little League players who attended youth day at the ballpark last Saturday. The city’s current population is over 115,000.

> One of the first things you see when entering the leftfield gate for a game is a small tent hosted by Hall of Famer Ferguson Jenkins and his charity foundation. Almost everyday, you will find great ballplayers from the past signing autographs in exchange for a donation to the foundation. This Spring, you would have seen Rollie Fingers, Gaylord Perry, Bert Campanaris, Willie Wilson, George Foster and many others greeting fans and talking baseball with them.

> Speaking of autographs, these games obviously offer fans greater access to ballplayers and many hope to get signatures from their heroes. Some players sign a limited amount, some don’t sign at all but the nicest memory is the generosity of Josh Hamilton during his first go-round with the Rangers (2008-12). Typically, the regulars come out of a Spring Training game around the 5th inning and head down the foul line toward the clubhouse. Fans congregate in the area hoping that players might stop and sign, but most just take a circuitous route to avoid the inconvenience. For those five years he spent with the club, Josh stopped every day and signed autographs for as long as he could, even standing in foul territory while the game proceeded just to accommodate the fans. We’ve all had someone in our life who has battled addiction and can clearly understand how difficult it can be to overcome. This is a guy we should all admire because he understands what the game is all about.

> The National Anthem is a traditional moment at every baseball game and we’re privileged to have talented people perform at the Stadium each day during February & March. From a retired Naval officer with a booming voice to young girls hitting high notes we could never even dream about to an older gentleman doing a saxophone solo, it is sure to give you chills.  Then, as the home team takes the field, John Fogerty’s “Centerfield” pipes in over the loudspeakers and we’re ready to “Play Ball”.

> The other people in the ballpark also make the experience memorable. For me, it never gets old to engage long-time friends and new acquaintances in baseball conversation. My closest friend and his beautiful wife have had seats in the first row behind the 3rd base dugout since the ballpark opened. Sometimes I go down and join them for a couple of innings but even when we’re at a distance we’re still close. Each day, when he arrives at the park, we catch each other’s eye and say “hi” by flashing baseball signs to each other. My season seats are right behind home plate and even though they are about eight rows up from the field, they are on the railing above the tunnel used by visiting teams. The result is that there is no one in front of me to block the view…the best seats in the house! “Duke” is my wingman for about 2/3 of the games and we talk baseball for hours each day before reaching our pitch count and heading home for a nap (me) or “honey do’s” (him). For the other 10 games, the adjacent seat is occupied by golfing buddies, out-of-town guests or an occasional pretty girl who hasn’t figured out how old I am. The last three years have been even more special, as my Son has made the trek from SoCal to join me for a game. Right across the aisle is a dear friend who makes an 11,000 mile round trip from the south coast of England each March to watch baseball. After many years of making the journey, the Customs agents at the Phoenix airport refer to him as the “British Baseball Guy”. This same section is also where the scouts sit with their notepads and radar guns. This allows me the opportunity to visit and talk baseball with really smart guys like Deric McKamey, Kimball Crossley, Jason Grey & John Cox .

> As most of the seats around mine are not season tickets, each day also brings new opportunities to talk baseball. Of course, there are always lots of Royals & Rangers fans in for a long weekend or extended visit.  We talk baseball for the whole game, agree that people who are bored by baseball just aren’t very intelligent and pledge to see each other again next year. And naturally, each visiting team is also represented by folks with jerseys from the Giants, Dodgers, Angels and others. Unlike pro football, there is never any animosity regarding loyalty. Everyone in the park is there for a good time enjoying the national pastime.

> Encounters also bring about numerous “small world” stories. While having lunch at a local eatery before a game, a conversation took place with a gentleman and his Son who were also attending the game that day. The usual baseball conversation got around to favorite teams and I said, “Red Sox”, the Father responded, “Me too”. It turns out that he lived north of Boston as a kid at the same time I lived west of the city. We are both huge fans of Ted Williams and remember taking that nickel street-car ride to Fenway Park in the 50’s. Think of it…he and I were certainly in the ballpark on the same day many times as youngsters and now, 60 years later, we’re sitting in Arizona reminiscing about those days.

> Cactus League facilities have standard food menus and a few more upscale items, but this ballpark has two choices worth trying. There are two kiosks on the concourse called the Diamond Grill that serve a freshly grilled Italian Sausage on a soft bun with grilled onions & peppers. And, on the 3rd base concourse is a food truck that arrives every year direct from Iowa and offers both a pork tenderloin sandwich and chicken tenders. If you’re not already salivating, both items come with waffle fries.  When the e-mail invitations are sent in February to my once-a-year guests, they seem more excited about the prospect of consuming one of these culinary delicacies than they are about the ballgame itself.

> As a Fantasy player, the games themselves are always exciting, interesting and informational. You can read all the scouting reports you want on the Internet, but the personal stories make the game a joy. Two years ago, a former #1 pick from 2004 was attempting a comeback after battling alcoholism and serving a jail sentence for drunk driving. He hadn’t played since 2011 and was originally a Shortstop, but now he’s a Pitcher and over the last two seasons, 31 year-old Matt Bush had a 10-6 record with 11 Saves and a 3.08 ERA for the Rangers. You can’t make this stuff up.

> There is also the occasional sad moment. Just last weekend, Rangers coach and former All-Star player Howard Johnson was hit in the face by a check-swing foul ball while he was in the dugout. The game was delayed and he was eventually carted off the field and taken to a local hospital. The initial report is that there are facial fractures involved but surgery will not be necessary.

> And, of course, there are always a few enthusiastic fans applauding for an unknown prospect wearing #87 with no name on the uniform. You realize quickly that they’re members of his family and just hope he doesn’t strike out or give up a 3-run homer.

> Even the most ardent fans can’t know about every player, so Spring surprises like Daniel Vogelbach, Jose Pirela & Cheslor Cuthbert remind us that we’re not quite as smart as we think we are.

The Old Duck has only been in love a few times over the years, but the relationship with this girl I call Spring is the most enduring. She is beautiful, loyal, consistent and always in a good mood. I will miss her very much over the next 11 months, but knowing that she’ll be there “same time next year” makes it easier to bear.

3 thoughts on “Same Time Next Year”