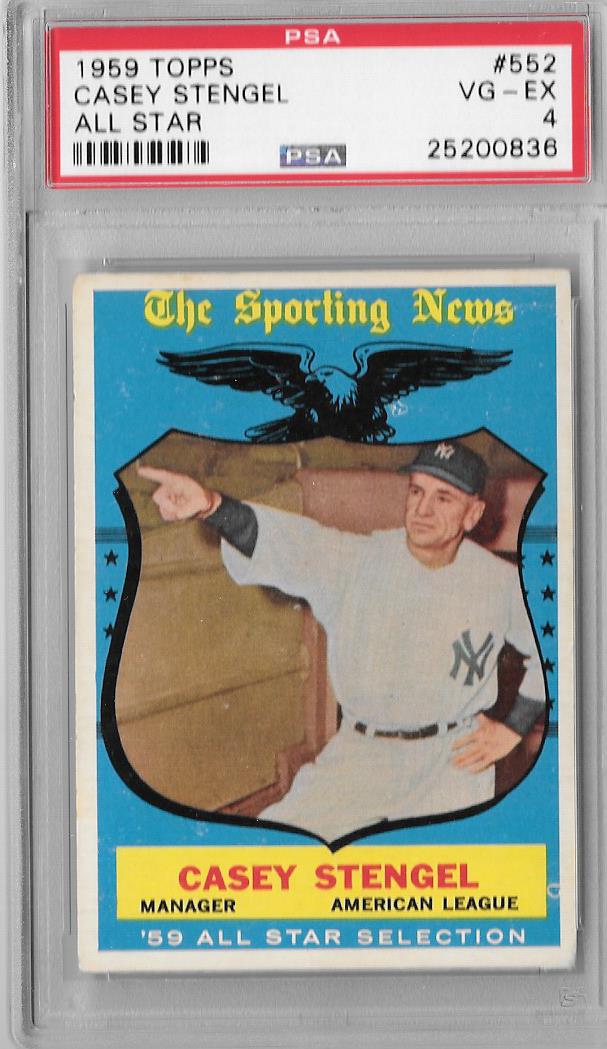 Back in the 1950’s, Yankees Manager Casey Stengel was a most colorful and confusing character on the baseball landscape. After all, he once said, “You have to have a Catcher because if you don’t, you’re likely to have a lot of passed balls.” And, “The key to being a good Manager is keeping the people who hate me away from those who are still undecided.” Of course, he was also very much crazy like a fox because he also said, “Being with a woman all night never hurt no professional ballplayer. It’s staying up all night looking for a woman that does him in.”

From 1949-1960, Casey’s Yankees won 10 of 12 AL Pennants and 7 World Series titles. In an era before advanced baseball statistics, it seems that he was decades ahead of the curve in the ability to manipulate line-ups and get the most out of a 25-man roster. Of course, anyone can put Mickey Mantle’s name on the line-up card each day, but that version of the Bronx Bombers seemed to have a different hero each day. If you look back at some of those rosters, it’s clear that Stengel knew about percentages because he took advantage of platooning LH & RH hitters on a regular basis. Just using 1954 as a snapshot, you’ll see that the everyday 1B Joe Collins (who hit LH) didn’t even get 400 AB’s because Bill Skowron (who hit RH) was available. “Moose”, in his rookie season, hit .340 in 215 AB’s. In the corner OF positions, Gene Woodling, Irv Noren & Enos Slaughter batted from the left side, while Hank Bauer & Bob Cerv batted from the right side. Even HOF Shortstop Phil Rizzuto had less than 400 AB’s because switch-hitting Willy Miranda was available.

The modern version of that team is the Oakland Athletics, under the guidance of GM Billy Beane. Working with a limited budget, the “Moneyball” system has made the A’s competitive with their major-market opponents. One of the keys to their success is the same platoon blueprint that Old Casey implemented in the 50’s. The A’s averaged over 92 wins in 2012-2014 utilizing versions of this formula. In the last few years, a number of successful teams have taken advantage of RH/LH splits including the 2018 Dodgers.

For MLB GM’s and Fantasy Baseball participants, this lesson shouldn’t be ignored. For whatever reason, LH batters always have more difficulty hitting LH pitching than their RH counterparts have hitting RH pitching (have you ever heard of a “situational right-hander”?). If teams blindly continue to give their LH hitters AB’s against tough LH hurlers, it will impact productivity for the team. Hitters like George Brett and Tony Gywnn only come around every decade or so. From a Fantasy prospective, you need to know about this statistical category because players who don’t produce will eventually lose playing time and impact your investment in the player. The analysis becomes even more critical in today’s game where teams now carry 12 or 13 pitchers and the platoon option gets reduced with a limited amount of batters on the bench.

Looking only at fairly regular members of the line-up, here’s some eye-opening numbers about LH hitters and their success against LH pitching in 2018. We’ll use OPS (On-Base % & Slugging %) as the guideline.

The question is if this type of player will get more or less regular AB’s moving forward? And, if they continue to get those AB’s, is it a positive or negative for your Fantasy roster? More AB’s will not only negatively impact the BA/OBP category, it also becomes a factor for power numbers, as this type of player has a tendency to underperform in that realm also.

Are there LH hitters you can count on to be in the line-up everyday? A few to consider –

Just what you need, another calculation to include in your 2019 player analysis. Sort of like giving a golfer one more swing-thought.

One thought on “The Old Perfessor’s Platoon”